As much as I love my Remix UI, I’ve been having a number of issues with Stuf this expansion, and decided to rebuild my UI around a new set of unit frames: oUF Karma. A slight twist on the stacking ideal found in Quse, I find that I really like the slight offset to provide more nooks and crannies to hide various auras that I’d like to track.

I’ve also updated my strings for my restoration druid Weak Auras, as well as a full listing of addons. 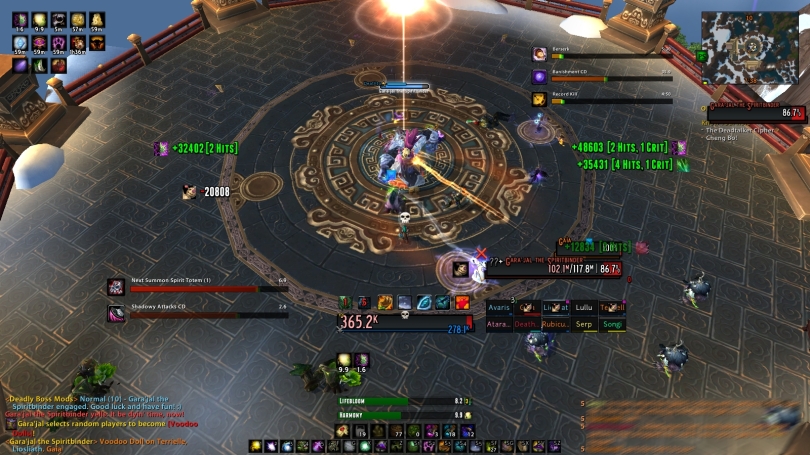 I was first exposed to healing in BC. I was a tankadin, and while my raid team loved me, it just didn’t always make sense for the consecration maker to tank every fight. We had other options, and so I not only became a switch hitter, I became an off-spec healer. To say that I hated paladin healing would be an understatement. I did not understand how people enjoyed hitting button one or button two in response to falling health bars. I think I aspired to be such a great tank in part to avoid ever having to heal anyone ever again.

Wrath changed my perspective on healers. It wasn’t that I loved paladin healing–I didn’t. But I finally got around to leveling a priest, and lo, it was awesome. I played holy, I played discipline, and there was so much variety and fun to be had, that I finally understood why people would want to do this whole “healing” thing.

A lot of things that appealed to me as a tank appealed to me as a healer. Healing is a dynamic role that requires a good understanding not only of the flow of the fight, but of your fellow players, and their foibles. While you might be tempted to fall into a rotation, there are plenty of times when you chuck the rotation and do something on the fly. I feel a personal responsibility for my playmates.

What I hate, and when I know something is horribly, horribly wrong is when I have to be the savior. Sometimes it happens. Sometimes it saves an attempt. But it shouldn’t happen. It doesn’t matter whether you’re a tank, dps, or healer: all can play a vital role in saving a bad attempt, but it should not be the norm. I just want to perform my function to ensure that my raid team meets success. Nothing is more satisfying than a clean, well-executed fight.

Because of how I feel about healers, and how they relate to a healing team, I’m of two minds on the healing cap issue. Overall I think it’s a good thing. Having a cap requires me to be what I consider a good healer: a player with a good understanding of my tool-box, well-prepared with a game plan for tackling major healing issues during a fight, but able to adapt and work with my team to cover mishaps. I really think it’s very difficult to heal well if you are responding to health bars, and don’t have a fundamental understanding of the mechanics of a fight. Being proactive is essential to providing excellent and consistent healing to your team.

The reason I’m not totally behind the mana cap is the amount of dead time that incurs over the course of a night. It’s hard to always be casting if you must conserve mana for peak times in a fight. While it’s great to have areas where you’re really pushing the envelope, it sucks to have to stand around twiddling your thumbs because it’s the only way to have the oomph you need at the right time.

The restoration toolbox also plays a role in why I’m uninspired by the mana cap at this point in Mists. The only real decision I make with my spells are whether I have enough mana to cast a Rejuvenation, or whether I should hold back. The new mushrooms are so lackluster I only plop them down if I’m 1) twiddling my thumbs and 2) I don’t expect the melee group to move at all.

For the most part, I agree with other restoration druids about the state of the class even I raid in a 10, and not 25 setting. Having two spells I never use anymore (Nourish and Healing Touch) and a band-aid burst spell that does pretty much nada have not really improved the efficacy of our class, and lead to a rather dull time over the long haul. While I don’t need a spell for every occasion, I’d like a bit more variety in the choices I have to make.

So far, I’m giving Healing in Mists a rating of Neutral. I’m not dissatisfied per se. I feel like the mana cap could be a good way to keep healing interesting up until the end of the expansion, preventing healing “bloat” by requiring healers to make decisions about their spell choices. On the other hand, having to stand and regenerate mana during a fight sucks. Having a limited toolbox is likewise uninspiring. I’d love to see a better balance between mana consumption and casting availability, and for the love of Elune, give me tools that are relevant!

If there is one fight in Dragon Soul I could have taken out of the developers lab and down to the local park to shoot, Deathwing’s Spine would have been it. It has all these elements that comprise a fun fight: a gimmick roll, adds to kill, adds to not kill, and a tight schedule to keep, but it is so bloody boring. The fight itself is long, the 3 plate pops reminds me of the 3 strikes and you’re out mode of Zelda without the cute animations, and it does not engage the raid team consistently.

END_OF_DOCUMENT_TOKEN_TO_BE_REPLACED

Ever heard a lazer chicken splutter? It’s not the easiest feat, especially with that beak of theirs. But over the weekend, as the hubby and I ran some randoms and worked on some Cata dungeon achieves, I could hear the anguished cries from the other room “Oh COME ON!”

Because I think we didn’t meet a single tank who understood what a solar beam was.

While a well-placed solar beam is sometimes placed on a lone caster to lure it into your tank’s waiting arms, more often, a solar beam would be dropped directly on a packed clump of mobs only for the tank to… remove them.

So ignore your cat-like reflexes which pull you out of dangerous AoE bad stuffs, and stay in the bloody solar beam! Your boomchicken will thank you.

This is a public service announcement brought to you by the Moonkin Sanity Council, Chapter 2493. Thank you for your support!

Lissanna wrote a really great article last week about gearing your Restokin. Although gear sets are much closer, and many pieces can be shared between restoration and balance nowadays, there’s always a tension that arises when you’re trying to keep two sets in the best shape possible. While I didn’t want to repeat information that has already been covered with finesse, I did want to take a moment to talk about my own experiences with covering a dual role, and how it impacts gear decisions.

END_OF_DOCUMENT_TOKEN_TO_BE_REPLACED

I’m not usually one to have a hissy cow when I’m having a bad night on an encounter. Ok, let me rephrase that: I might be  yelling at my monitor, but I don’t usually come screaming at the universe in print. Instead, I’m usually left with frustration at myself. Not my team, not my class, not the encounter being difficult, but how I could do something different, something better, to get the result I want.

Today is different. I don’t feel like I could have done anything better. I healed my little heart out, I tried every trick I could think of, and I still didn’t get the result I wanted.

END_OF_DOCUMENT_TOKEN_TO_BE_REPLACED

I hope everyone survived holiday time with the family! My goal over the holidays was to do some good ol’ fashioned achievement whoring, and I must say, it was a wild success. I started with Loremaster, which I haven’t quite finished yet having Icecrown and Bloody Hell Bloodmyst Island–with its quest chain tied to a note in some Blood Elf’s pocket–standing between me and the achievement. With all the questing, and the gear that was thrown in my face time, after time, after time, I also did something over the weekend I thought I’d never ever do: I visited the ethereal’s shop!

END_OF_DOCUMENT_TOKEN_TO_BE_REPLACED

I debated writing this post this early in the cycle: we’ve barely touched upon the impact, and for a non-theorycrafter like myself, it can sometimes take a bit more time, a few more bosses to feel really comfortable saying “This is how I feel.”

I know as we ripped through Dragon Soul that first week I was a bit bummed. Mana seemed hard again… but it was just me. My healing team compatriots were doing just fine. I was also struggling to match my throughput. It’s been beaten into every druid’s head: who cares about cool-downs, we ARE healing machines. And I must say, it sure didn’t feel like that when the shaman pushed out a couple thousand more HPS, and had less overhealing.

But, because there’s invariably a butt, I now have a heroic mode under my belt, and I’ve had that extra week to work through some gear changes and different healing environments (I’m looking at you LFR). And while I’m not ready to stand on the mountaintops and declare that druids are the most awesome healers in the known universe (even if we are), I am prepared to say that I’ve found acceptance, and here’s why.

END_OF_DOCUMENT_TOKEN_TO_BE_REPLACED

I don’t think it ever gets old. Stepping into a new raid encounter is always an experience I savor, and I love exploring new dungeons. Some members of our raid team took a sneak peek Tuesday night, but Wednesday was my first step in to the new dungeons, and Thursday saw the completion of normal mode for our raid team.

END_OF_DOCUMENT_TOKEN_TO_BE_REPLACED 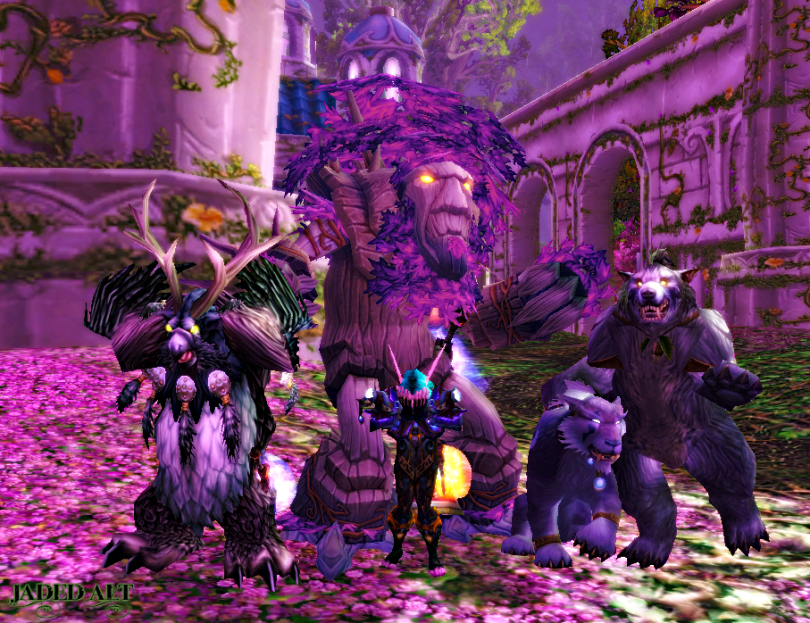 After hundreds of runs and thousands of drunken adventures gathering tier gear, I proudly present you my new transmog set! What do you mean you can’t tell the difference?!

Although not of my five reasons (because I’m restoration after all. I can show off my awesome outfit if I wanted), Blizzard has finally struck back at druid-kind for their awesomeness by taunting them with World of Dresscraft. On the other hand, maybe we should be thankful that we’re not paladins.